Onaplate shenfield acoustic nights begin this year on Friday 16th January with Richie Milton and Bill Farrow.  This will be the second time that Richie and Bill have come to play at Onaplate and hopefully it will not be the last.  No strangers to Brentwood Richie and Bill have played on Phoenix Radio several times over the last few years.  Both London born,  Playing guitar and singing, Milton became active on the UK blues scene where, he has maintained an audience for many years. he has now become a much-loved veteran, his repertoire ranges through blues, R&B and rock ‘n’ roll, all delivered in a lively and enthusiastic manner. Milton writes most of his band’s material, finding an effective mixture of traditional blues themes and contemporary trappings.

Farrow was born and bred in the east-end of London where he’s well known around the Folk and Blues clubs, not just for his renditions of Blues classics but also for his own compositions in a surprisingly wide variety of genres; the Blues, Rock n’ Roll, Humour  and even Music Hall.  Bill has recorded numerous albums, including ‘Blues & Views’, ‘Red, White & Blues’, and ‘The French Can’t Make Mangles Like We Can’, as well as several singles including ‘Canning Town Blues’, which became something of an anthem at the West Ham football ground, where it enjoyed regular plays over the PA, to the delight of the crowd.

When I saw the notification on Face Book from RICHIE MILTON that he and band-mate BILL FARROW (of the MILTON – FARROW SKIFFLE ‘n’ BLUES BAND) were to play an acoustic duet set at the local café, ONAPLATE in Shenfield, Essex; I was of course very interested. Firstly because I’ve been waiting for the opportunity to see the lads play for some time; and secondly because STEVE WILMOTT and his good lady Sue of Onaplate,  are trying to achieve something very worthwhile at the venue of late which deserves to be known more widely. 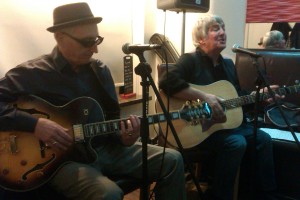 My regular readers will already know that I recently reviewed the latest Milton-Farrow EP – the excellent Skiffleodeon – on an earlier blog (#22). Since then, the pair have been asking me when I would come and see them play live; and this seemed like an ideal time. I confirmed that the gig was indeed going ahead by phoning Bill, and proprietor Steve; and along I went!

Onaplate is a little café in Hutton Road, Shenfield, Essex;  which (to my shame) I must have driven past a hundred times and never even noticed!  Its a charming place that sometimes hosts small art exhibitions for local artists. I deliberately arrived early in order to have a word with Steve. He is a big music fan, and last March, he and his wife Sue hit upon the idea of holding a monthly music night on their premises – and in the future this may be extended to bi-weekly events. The purpose is to promote local musical talent; and this is a project that I think is very worthwhile indeed; and has my full support (for what that is worth!)  Milton and Farrow have played there before; along with local 19 year old singer-songwriter ANNIE MAY ADAMS; and Bluegrass band ONE TREE HILLBILLIES. The appearance of a Mexican Mariachi band is a possibility in the near future too, apparently. A good variety of acts then; and I wish Steve and Sue the best of luck with their project.

As I chatted with Steve and sunk a pint of Spitfire, Richie and Bill turned up with all their gear; and began setting up. I was interested of course, in their guitars. Richie brought his Epiphone semi-acoustic (Joe Pass model); and Bill had a lovely Taylor acoustic with him. Richie also brought along his mandolin; and I tried it out, along with their geetars too. Once set up, I chatted with the lads as they scoffed a tasty looking cheese platter each, provided by Sue. They spoke about their long and varied careers as musicians; and to be honest, there is enough material there for a separate article – they have about a century of experience between them!

Soon it was time for some Blues! I’d asked Bill if there was a set list. He showed me a sheet of paper with about a fifty songs written on it – about half of which I knew. But he told me that he and Richie generally decide what to play as they go along. They decided to kick off with ‘Ain’t It Good’; Bill on vocals. Good start. They followed up with ‘Running Out Of Dreams’ and ‘Believe Me Woman’ – both of which I particularly enjoyed.  Richie’s country-blues song ‘ASAP’ was next – we could have been back in the Delta! The boys then played they’re Jug-Band Blues song ‘You Can’t Blame Me’, with Richie playing his mandolin and singing scat. The mandolin got a further airing for a good cover of the classic ‘Deep Elem Blues’ with Bill singing.

Strapping the Epiphone on again, Richie sang his fine boogie number ‘Everybody Sang The Blues’.  One of my favourite old Blues songs BIG BILL BROONZY’s ‘Glory Of Love’ was covered next – an impressive performance by Bill it was too. He continued with another old classic: ‘Tom Dooley’. Richie’s excellent Delta song ‘T.O.K.Y.O. Blues’ followed – great guitar from Bill on this one, with his capo high on the 7th fret. The charming song: ‘I Get The Blues When It Rains’ soon followed.  ‘Blue Blonde Baby’ from their album Barefoot And Blue included a R’n’R-style solo from Richie which sounded great on his Epiphone. Bill did an fine instrumental next – another Big bill Broonzy number: ‘Hey, Hey’. Finally, the euphemistically titled ‘Keep My Engine Clean’ (one of those Blues songs with a cheeky lyric that would make your old Nan blush!), ended Part One of Richie and Bill’s excellent set.

During the break I chatted again to Bill, who introduced me to MARTIN McNEILL of Essex band BOTTLENECK BLUES, who had also come along especially to see Bill and Richie’s set. Martin and his band play regularly at THE RAILWAY in Southend-On-Sea; and at PEGGY SUE’S PIANO BAR in Leigh-On-Sea.  I intend to visit one or both venues soon. Bill tells me that he’s still playing at least one gig a week these days; but Richie is out every night – often with his own band THE LOWDOWN.

Part Two of the set began with Bill’s upbeat  ‘Pulling All The Boozers Down’, from the Skiffleodeon EP.  The lively vibe was kept up with the great old Rock’n’Roller, ‘Corinna, Corinna’; with another good solo from Richie’s Epiphone.   Bill’s song ‘What Do I Do Now?’ followed. Although originally penned by Bill for a play, it was actually recorded by JACKIE LYNTON first. Another song from Skiffleodeon was up next: Richie’s Rag: ‘Ms. Sippie Brown’ – a great song with a tasty solo from Bill. Then it was back to the mandolin for Richie, to play ‘Big Leg Woman’. This is  an old Country Blues song by LEAD BELLY that was originally entitled ‘Big Fat Woman Blues’; during which the lads had a fit of the giggles! They poured ‘Rain, Lotsa Rain’ on us next; which precipitated a deluge of applause!

Someone called out for ‘Alberta’, then. ‘I bet Bill knows it – he knows all the old songs’ said Richie as he strapped his Epiphone back on. Sure enough, after a little think, Bill was playing it; and Richie soon picked up the vibe too. A nice little song. Next they dedicated one of their own songs to their hosts at Onaplate: ‘BBQ Chicken And wine’. And the chicken theme continued with ‘Chicken In The Yard’ – both songs from the EP. ‘We’ve got a whole album out of chicken songs!’ Richie quipped. But Bill assured us that ‘No chickens were harmed in the writing of these songs!’ The lads shared vocals for ‘Careless Love’; before they drove headlong into ‘Too Many Drivers At The Wheel’ – a boogie with a fine solo from Richie. They gave us ‘Odd Sox Boogie Blues’ from Barefoot & Blue next (which has also been recorded by Mr. Lynton); and followed it with ‘I Wanna Do It All Again’ from New Tracks (Down An Old Road). Their final offering was the excellent ‘Midnight Special’. As they finished, some wag called out ‘Give us another chicken song!’

Well, what a superb little set,  from two very well respected local Bluesmen – in such a lovely place too.  I enjoyed it a lot. Its a shame that there weren’t more punters in; but its early days for this venue, and I’m hoping that Steve and Sue Wilmott can achieve their permitted full capacity in the near future. After a bit more chat, we all said our goodbyes; and I helped the lads load up their kit in Richie’s car. I can recommend Onaplate; its  a charming little venue. There was a modest, but appetising menu laid on for the evening, but I didn’t try anything – it looked good though; and Richie and Bill had no complaints, I know!

Here is a link to Richie Milton’s website for his band’s gigs;  and those he plays with Bill too: http://www.richiemiltonandthelowdown.co.uk/

Here is a link to the Onaplate website which details forthcoming gigs: http://onaplate.net/

Here is a video of the Milton – Farrow Skiffle ‘n’ Blues Band playing their ‘T.O.K.Y.O. Blues’ at The Bull’s Head, Barnes; last December….